Flashstake: The Time Travel of Money 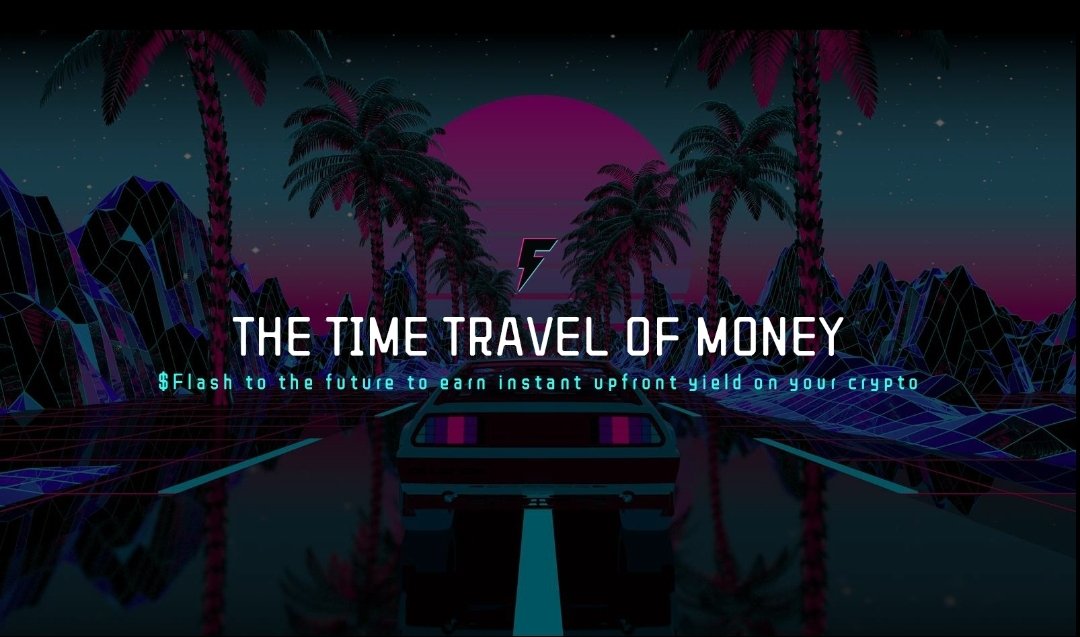 You may have heard the term “money now is worth more than money later”. The time value of money means your fiat money today is worth more than your money tomorrow, because of inflation. Inflation increases prices over time and decreases your purchasing power. But what if that could change and you could be able to bring money from the future? We can't travel into the future in the physical world, but what if we could in the financal world?

For the first time ever, this concept becomes a reality with Flashstake.io. Flashstake is a permissionless protocol allowing everyone to stake FLASH tokens and earn instant upfront yield. It enables a new DeFi framework that wasn’t possible until now: Flashstaking. Flashstaking introduces the concept of locking money today and earning money from the future — the time travel of money. All done in a decentralized, instantaneous, and permissionless manner. Its unique mechanism is Proof-of-Time. While not an official blockchain consensus mechanism, it is conceptually set apart from Bitcoin’s Proof-of-Work or Ethereum 2.0’s Proof-of-Stake, which require mining or staking power. Instead of staking and earning small amounts of interest over long periods of time, Flashstake allows you to earn instant upfront yield on your crypto. 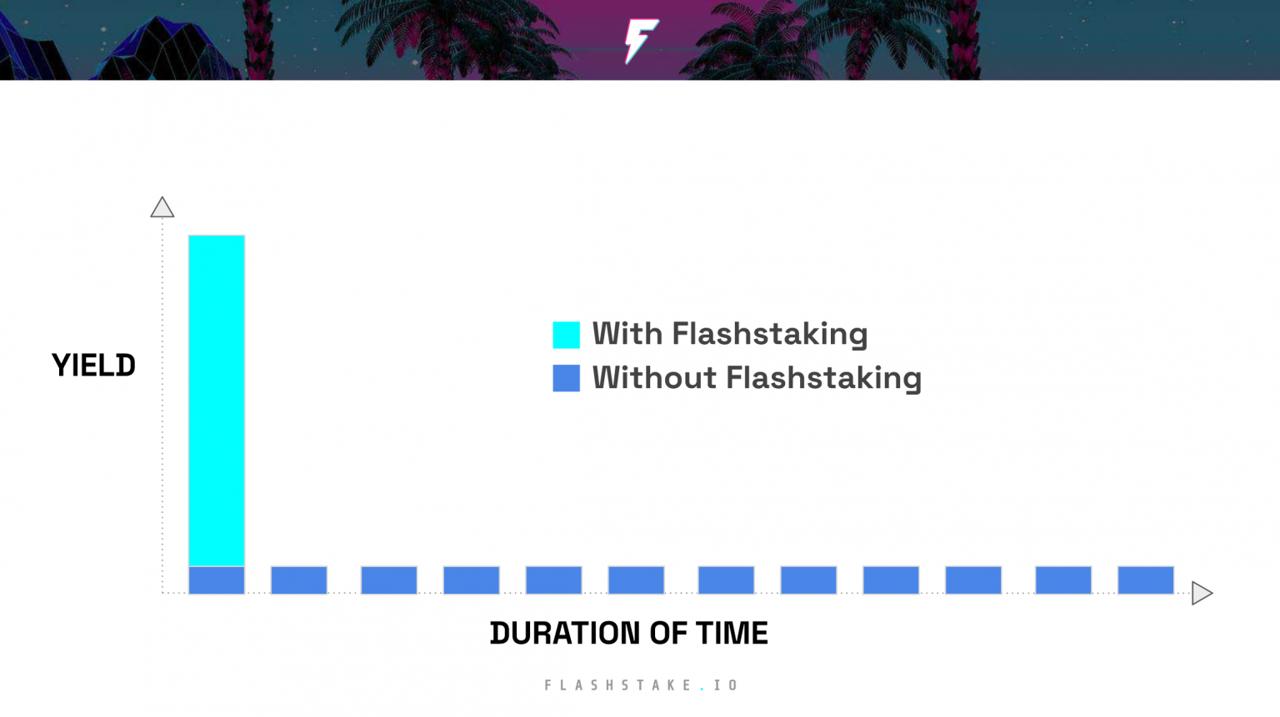 Flashstaking works similarly to flashloans, where anyone can borrow any amount of capital as long as they pay it back within one ethereum transaction. However, instead of borrowing money, you stake capital for a predetermined amount of time and earn the entire reward. Instant, upfront, all in one ethereum transaction. Everytime someone (flash)stakes, instant yield is minted as FLASH tokens and swapped for the token they have chosen within the Flashstake protocol, while much more FLASH is locked up for extended periods of time. Here is how it works in a single picture: 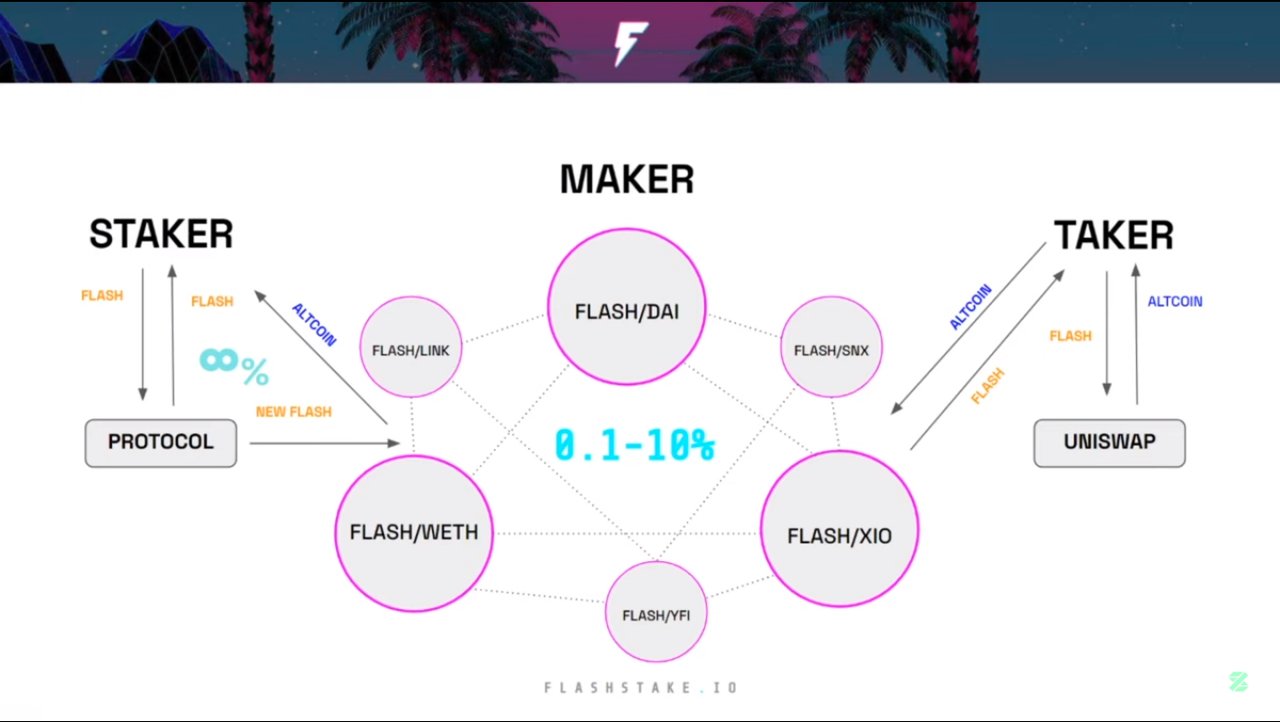 Through the Flashstake dApp, users can flashstake their FLASH tokens for a desired amount of time in return for a corresponding yield reward, earned immediately. Flashstake is trustless and allows for other projects to build on top of it in order to utilize its awesome flashstaking capabilities and this is just it’s basic use case.

$FLASH is the primary flashstaking token that gives the safest, fastest, and easiest transition for the protocol. If, for example, someone stakes for a year those FLASH tokens are locked up for a year. The result could be limited supply and price surge. There’s also incentivised token burning for early unstakes.

For example, if you stake $100 of SNX (Synthetix), you may earn $0.05 a day over the course of a year, totally $18.25. However, with FLASH, you can stake $100 and earn $18.25 immediately, upfront (assuming interest rates are the same). The FLASH tokens remain staked and locked for 1 year, but you earn the whole staking reward today. You can unstake earlier if you want, but a part of your FLASH tokens will have to be burned as a “fine”, based on the remaining time.

Flashstake was developed by Blockzero Labs (read also my article about Blockzero), a blockchain development studio, with a visionary team, focused on launching innovative, original, and experimental ideas into the decentralized world. 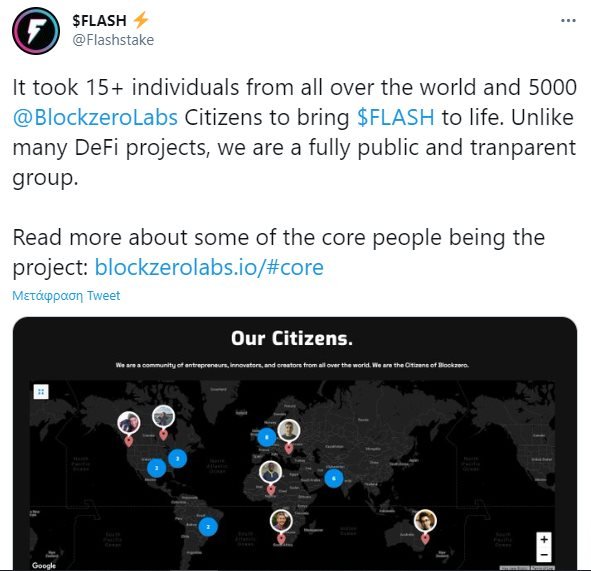 What to look forward to in the coming months:

ETH gas fees are keeping a lot of people from using the protocol right now, but L2 solutions are going to change that, allowing for nearly free Flashstakes. As soon as Optimism is made public, Blockzero Labs plans to put development resources into Optimism and will continue to explore alternative chain options like Avalanche and Fantom.

Venmo and PayPal give you a custom link to send to your friends in order to receive payments and for people to send you money.

FlashstakeMe will be a similar platform, but instead of having to send you money, they can simply Flashstake and redirect the yield to your wallet directly. Or you can do the same to send money, you keep the capital staked and you send the interest to whoever you want to pay. FlashstakeMe will be the world’s first transfer-less invoicing system. 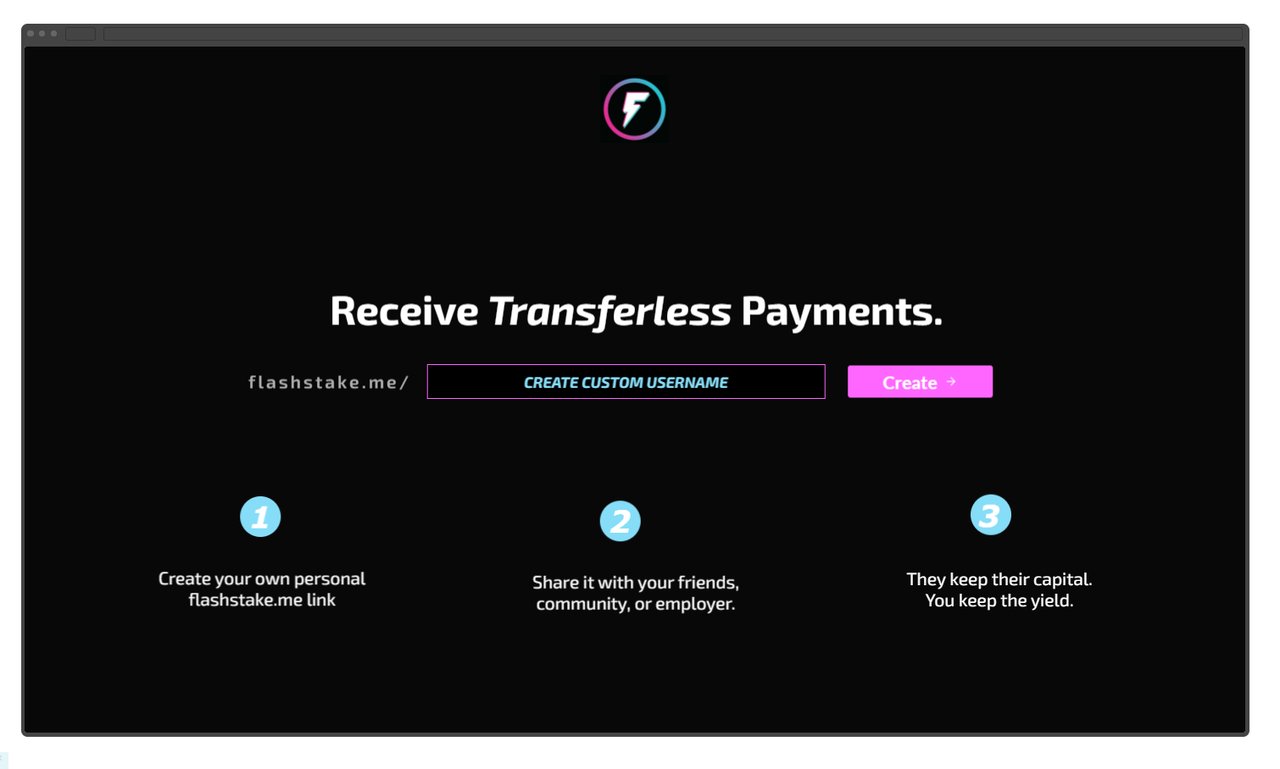 This platform will also enable Upfront Flash Offerings (UFO) for startups. Think ICOs, but instead of risking your bag, you can flashstake a startup and give them the yield. This would be a solution for startups to raise risk-mitigated capital. You will also be able to do Flash Donations, supporting a charity by flashstaking. 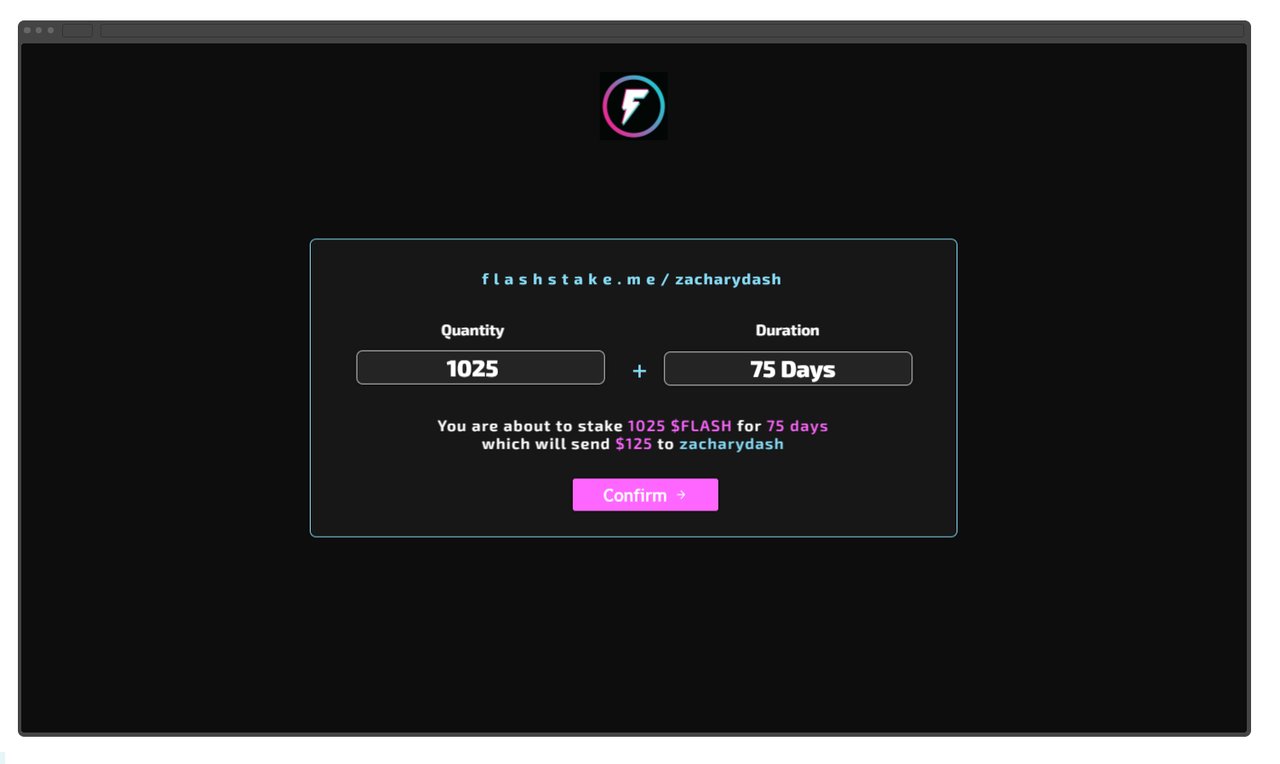 Imagine being able to Flashstake any token. Whether it be DAI for LINK or SNX for AAVE, the Zynthetic Upgrade would make this possible. FLASH token will still offer way higher APY than the other tokens, but Zynthetic will put the flash protocol on the map just by allowing anyone to get upfront yield on their ERC tokens. 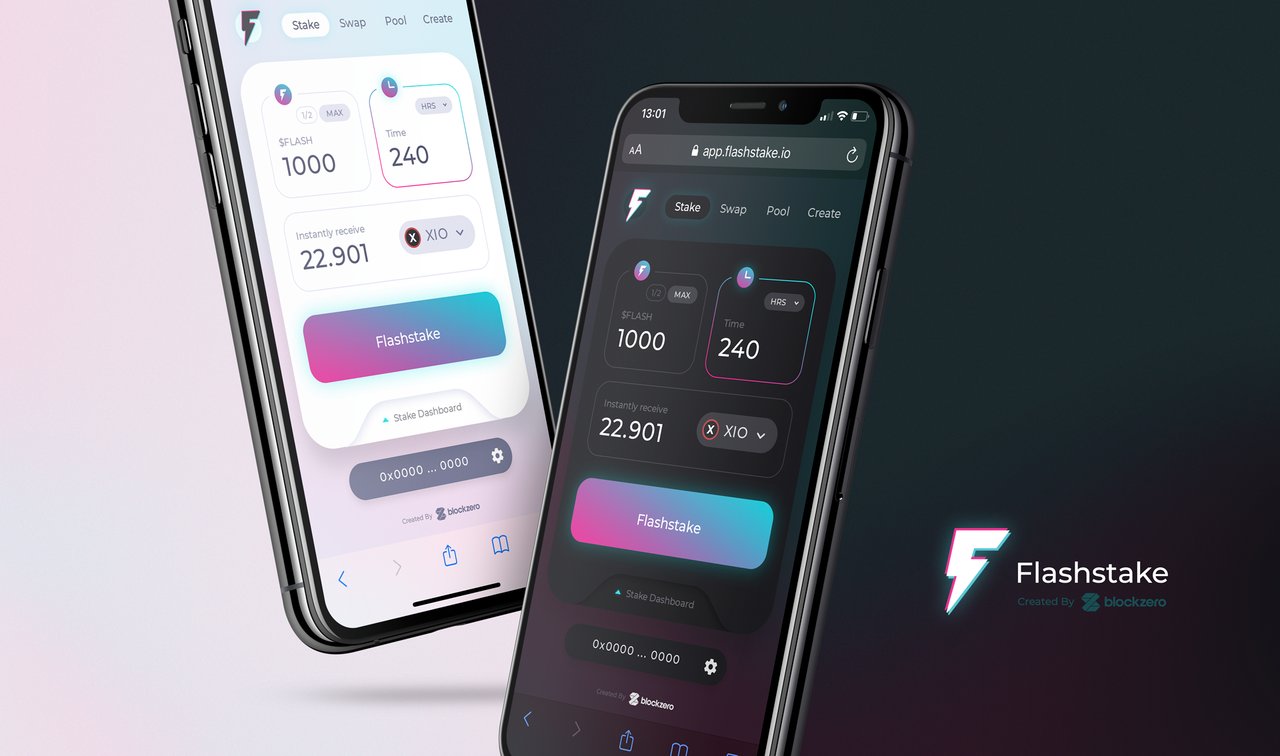 Overall, this is one of the most exciting and innovative projects I have seen. It’s the first of its kind, a revolutionary platform built by a visionary team. Flashstake solves the disincentives of locking capital for long periods of time by solidifying the market value of opportunity cost in the present.

If you want to learn more about Flashstake (FLASH):