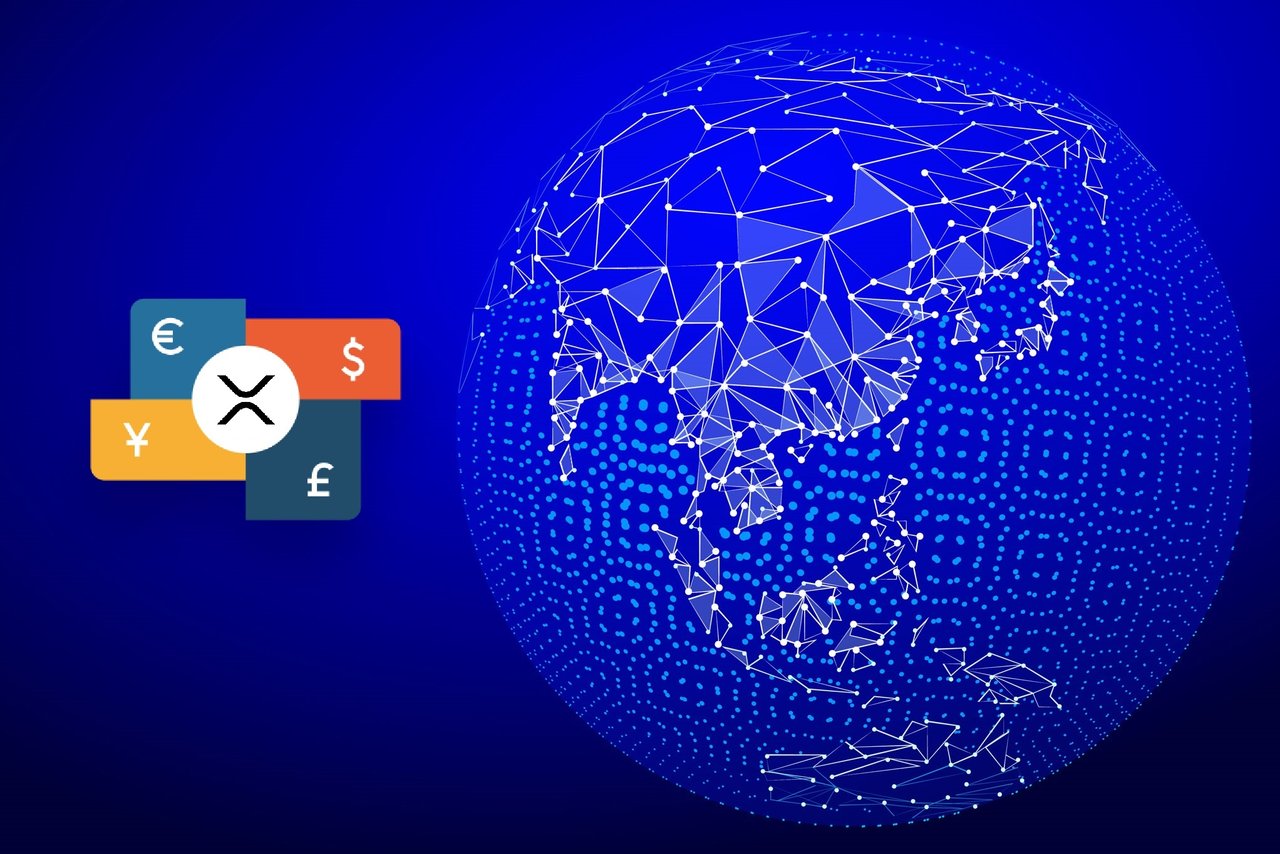 Sending money across borders is more important than ever before, either as an individual or as a business, especially in these difficult times. The pandemic gave a boost to the global digital economy and increased the need of moving funds across borders when traveling was not possible. And yet, there isn't any complete global payments network, there is no interoperability between networks, and you can't send money and value efficiently with the current outdated systems.

And actually, no money is ever moved with the current system, just account entries in correspondent banks' ledgers get adjusted (credited/debited). So basically, just data is exchanged and nothing else. We have SWIFT, which is owned by the biggest banks in the world and it offers a messaging service. In order to do a cross-border transaction and get settled, there are 2 options:

1. Your bank must have already established a direct relationship with the receiving bank, which means that it must have a pre-funded (nostro) account with the other bank or in simple words it should have “parked” enough money in that account in order for your transaction to happen.

2. Your bank can rely to other intermediary/correspondent banks (usually the major banks) that have already established a relationship with the receiving bank and your bank pays them (fees) for that. And that's what most of the banks do, because it takes too much time (usually 9+ months) and resources for a bank to create a new relationship with another bank. This is called correspondent banking. Isn't that costly and time consuming? You will ask. Of course it is. But that's how the entire financial system works in the most part for the last few decades. You can see how international payments work in the picture below: 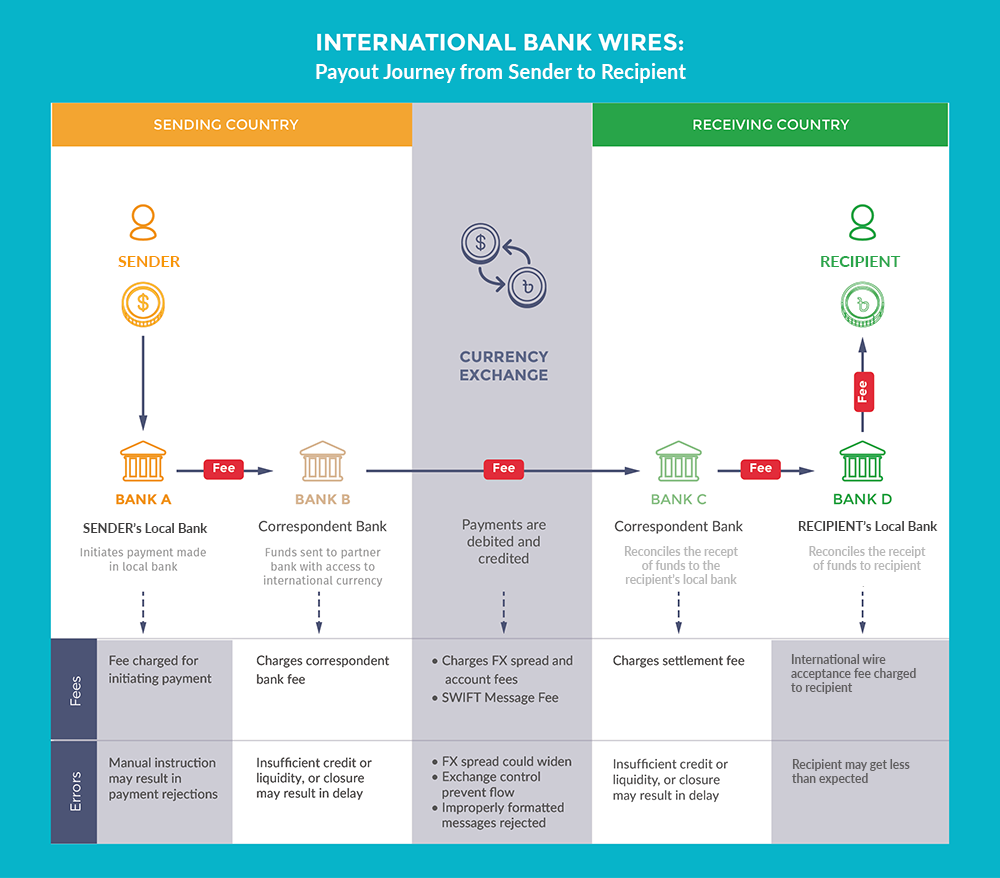 SWIFT has created an improved messaging system called SWIFT gpi which, as they claim, it improves the speed, security and transparency of payments. They say that about 50% of SWIFT gpi payments are credited to end beneficiaries within 30 minutes. That's right, credited, which means that there is no actual exchange of value and transfer of money, only exchange of data and messaging. The average SWIFT payment often takes 3-5 days on average. But what SWIFT also hasn't told you is that those payments that are credited between minutes and hours, are mostly in the same time zone and in big corridors. SWIFT gpi only “works” in big economies and between the biggest currencies that already have efficient payment rails and locked (pre-funded) liquidity. If you want to send money to South America, Africa and some Asian countries, or generally exotic corridors, it may take up to 10 days for the transfer to be completed, and don't forget the huge fees you will pay and other problems that may occur. A very painful procedure. What does this mean? SWIFT gpi is simply a better horse and when you know that a Ferrari already exists, what will you choose?

Who is the ferrari? A company called Ripple that wants to change this outdated and broken system that favours only a few big players. Ripple is building the Internet of Value where everyone moves value as easy as sharing data on your mobile phone. A way to move money instantly, inexpensively and securely. A level playing field for everyone. The CTO of Ripple, David Schwartz, has said that rapid payments create the need for rapid settlement, and with the current system rapid settlement is not possible. That's where XRP comes in, as it is the perfect rapid settlement tool. xCurrent, Ripple's messaging system, had to be created because the current payments technology isn't good enough to get the benefits of XRP. xCurrent compares with SWIFT gpi, as they are both messaging systems and while xCurrent solves all the problems of SWIFT, eliminating inefficiency with no error rates, better transparency, bidirectional messaging and payment-settlement in seconds, It still doesn't solve the pre-funded liquidity problem, which is the most costly in the banking system and payments.

XRP as a bridge currency can eliminate the need for nostro-vostro accounts (pre-funded liquidity), as well as the need for the many correspondent and intermediary banks. It also eliminates credit and liquidity risk from the process, lowering bank costs considerably. The network finds the best price for exchange and liquidity, and financial institutions are no longer locked in, eliminating the settlement risk. This will benefit the whole system and release the large amount of funds that cost too much and are trapped worldwide, which are estimated to be around $10 trillion. This means that these trillions of dollars are trapped in many fiat currencies all around the world, while they could be used more productively to benefit the economies and solve problems. With XRP, banks and institutions only have to hold their domestic currency and maintain one account with XRP which minimizes the number of intermediaries involved and their markup on spreads. They also don't have to trust anyobdy, since XRP is universal, jurisdictionless and decentralized. Ripple’s On-Demand Liquidity solution uniquely uses XRP to offer liquidity on-demand. Taken together, Ripple and XRP can save money, time and enable instant settlement with actual transfer of value.

On-Demand Liquidity, not only offers instant settlement, but can also cut the nostro-vostro liquidity and treasury operations costs, which represent the 61%, on average, of total fees in every cross-border transaction. 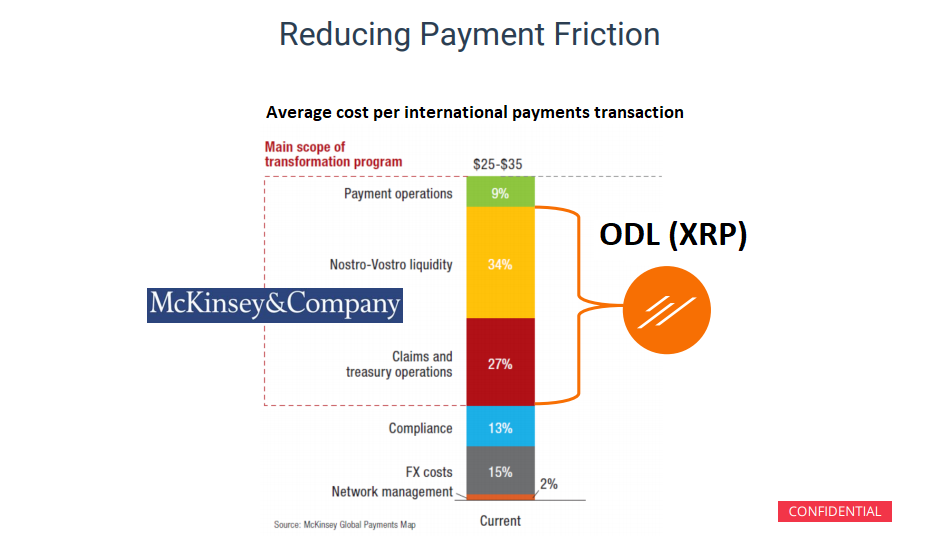 Some people say that SWIFT can partner with Ripple, but that would change the status quo and threaten the correspondent banking system and the big banks that make too much money out of it. They will either adapt or lose a big market share. Don't forget that the head of gpi has said that the goal for SWIFT isn’t to settle in real time, but rather to create certainty for businesses. A certainty with delays, many fees, opacity and vulnerabilites. As Brad Garlinghouse has said pointing to Citi, HSBC and Chase at the top of SWIFT:

They are making a lot of money from other banks. We talk to banks, and 99.9% of them want Ripple to be successful because they’re sick of paying these guys.

Making a head to head comparison of how a payment through RippleNet and SWIFT's correspondent banking is processed, might make you feel disgusted about SWIFT: 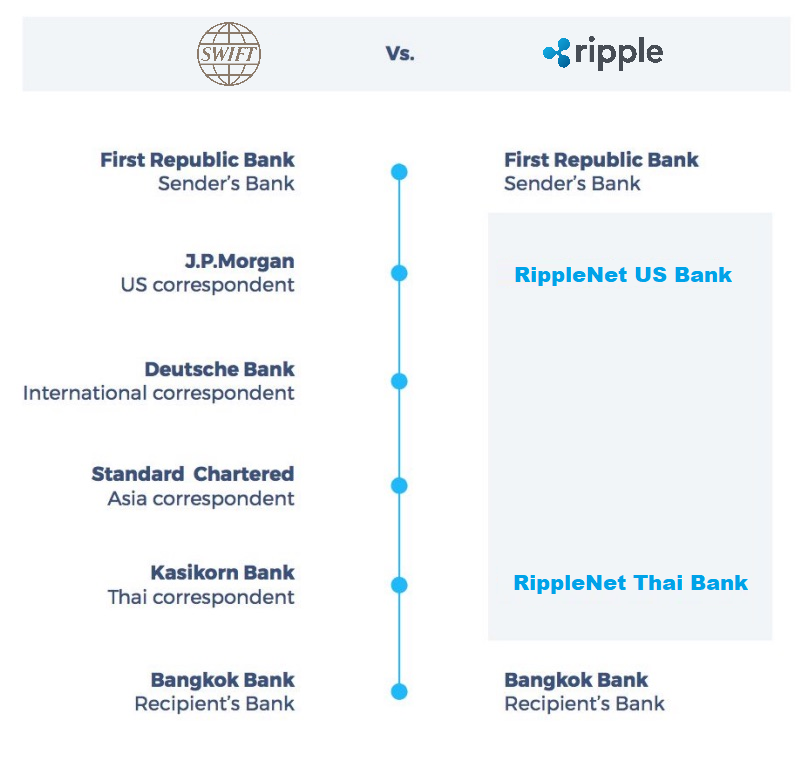 In simple words, correspondent banking is theft. So, you understand why SWIFT doesn't want to change its system and create a new one adopting blockchain and digital assets, having also stated that the company decided to build the gpi service without blockchain because it wanted to deliver immediate value to its clients and stated on twitter that cryptocurrencies will not solve delays in international payments. Ironic isn't it? While it has been proven that blockchain technology and digital assets solve all these problems, SWIFT claims the opposite. Too much profit is at stake, why should they change this profitable system? If we compare Ripple and SWIFT we see clearly who is going to win in the long run: 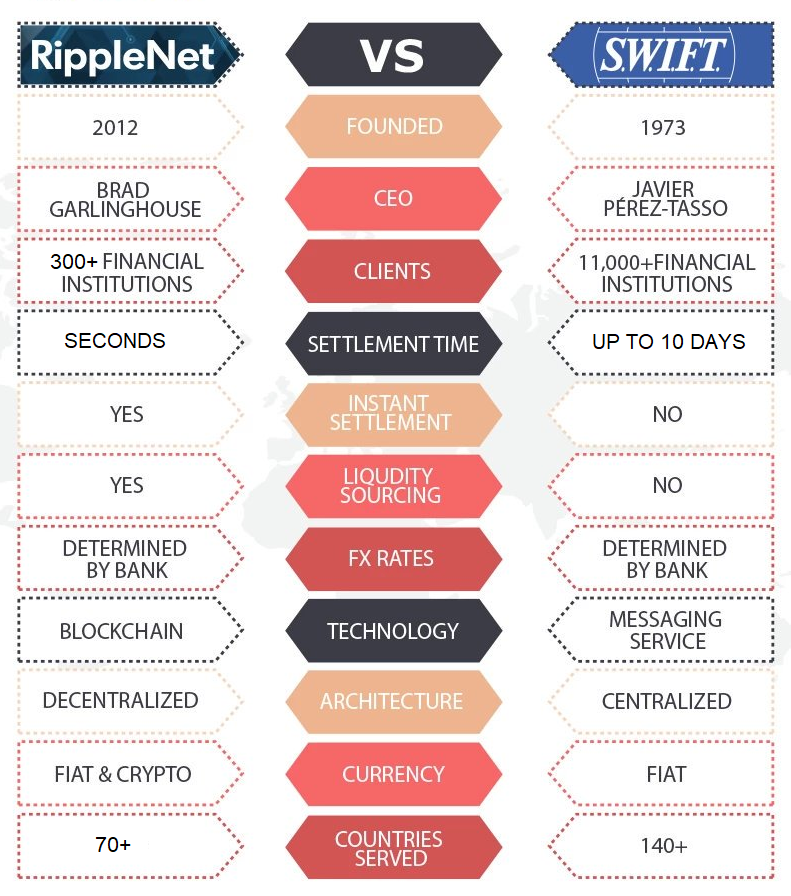 The main difference between them is that SWIFT means just exchange of data, while Ripple means exchange of value. Nobody else in the world offers exchange of value, which means that there is no face to face competition for Ripple and probably will never be, because the main advantage that Ripple has and nobody else has, is XRP. There is only partial competition like SWIFT gpi competes with xCurrent, but not as a whole. Ripple has the full package and that's why they are revolutionizing the whole financial system. Will SWIFT stand in a corner and watch Ripple turn into a behemoth, while they lose more and more customers? Probably, yes.

Why XRP is the most misunderstood cryptocurrency